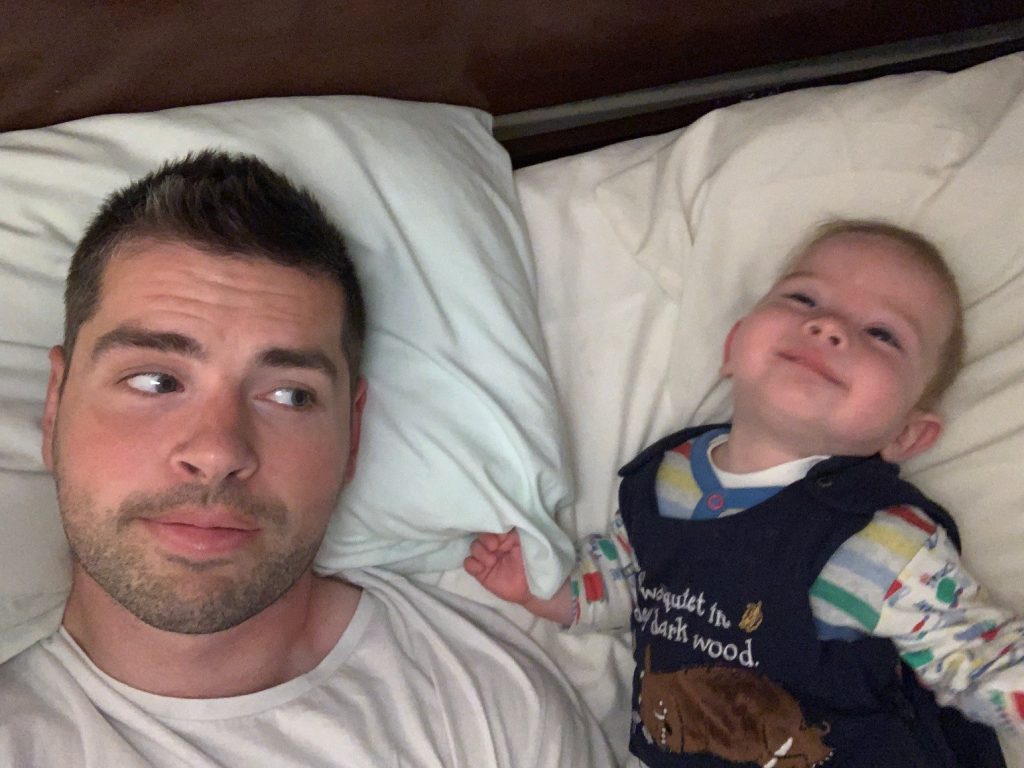 When you have a baby there are a number of things which are unknowns in your new world, but depending on which way they go can either see you whiz through that first year taking every beautiful moment in, or, well, lets just say you go from being a functioning, active, spritely human being to some kind of automated shell of a person just desperately seeking to make it through the day. One such unknown is night feeding. Will they wake regularly? Will they feed ok? Will they go back to sleep quickly once fed? So many questions which you know will make or break you.

I think Harry was a bit of a pain feeding at night and Josh was marginally better, but I’m convinced God very graciously causes parents to forget the trauma by the time cherub number 2,3,4 etc comes along.

So feeding Jude during the night was not something I was particularly looking forward to, but by and large he was a good boy once he’d had his milk and would go straight back to sleep.

Having done this for several months however, I realised that each feed would take about 20 minutes to get through, which when added up accounted for around 73% of my night’s sleep. So one night, in my bleary eyed state, it came to me – the bottles I was using were for new-borns, (or as any professionally trained child feeder will tell you, the official term is ‘Slow Flow Teats’).

Aha! I thought, there’s the problem, Slow Flow teats. I need me some of those Fast Flow Teats, and why faff around with Medium Flow Teats, the Ford Focus of Teats, when I could be using Mercedes A Class Fast Flow Teats.

So the next day I proudly popped into Boots, walking out holding my newly purchased set of Fast Flow Teats, I smugly worked out the precious additional minutes I would get to spend that night dreaming of sales on nappies at Tesco.

The problem, I was about to realise, was that I hadn’t consulted Jude on this new arrangement. And if I’d learned anything from our fledgling father/son relationship it was that we needed to be better at communicating our needs and expectations with one another.

So that night, as darkness descended on the Wicks household, eager to see my freshly acquired purchase in action, I excitedly tore open the packaging and sterilised those bad boys.

Then lying in bed like a child eagerly waiting to hear the dull thud of reindeer hooves on the roof at Christmas, I sat nervously clutching a bottle of formula straining my ear to hear the first murmurings of a hungry infant.

The hours went by, 12am, 1am, 2am… until finally ‘Hark’ I heard the sound of little arms banging against a cot like a tiny angry inmate demanding nourishment.

Springing forth and bottle, complete with Fast Flow Teat, in hand I lifted him out of his cot and started to feed him. Alas something wasn’t right, as now Jude, expecting his Slow Flow Teat, was guzzling down milk at a rate previously thought impossible to man.

As milk filled his mouth it started to overflow, gushing down his cheeks like a little dairy Niagara Falls, soaking his grow bag and sleep suit. But I’d now gone past the point of no return, for to stop the supply would be to only anger the lad and cause untold ruptures to the feeding space/time continuum.

And yet now the milk was not only overflowing his mouth, it was too much for him to swallow causing him to choke, spluttering milk in every direction.

And THEN he started to cry. Angry at the humiliation, Jude refused to have any more milk fearing that I’d turned into some kind of medieval torturer attempting the latest water boarding techniques. And he was definitely not in the mood to go back to sleep.

Fast forward an hour – having changed him, played with him downstairs AND let him watch several reruns of Happy Days, I sheepishly made up another bottle of milk… and in great humiliation reached to the back of the cupboard for those precious Slow Flow Teats.

Within 20 minutes Jude had downed the lot and was asleep once more. I had learned my lesson.

Never change a babies routine without consulting them first.