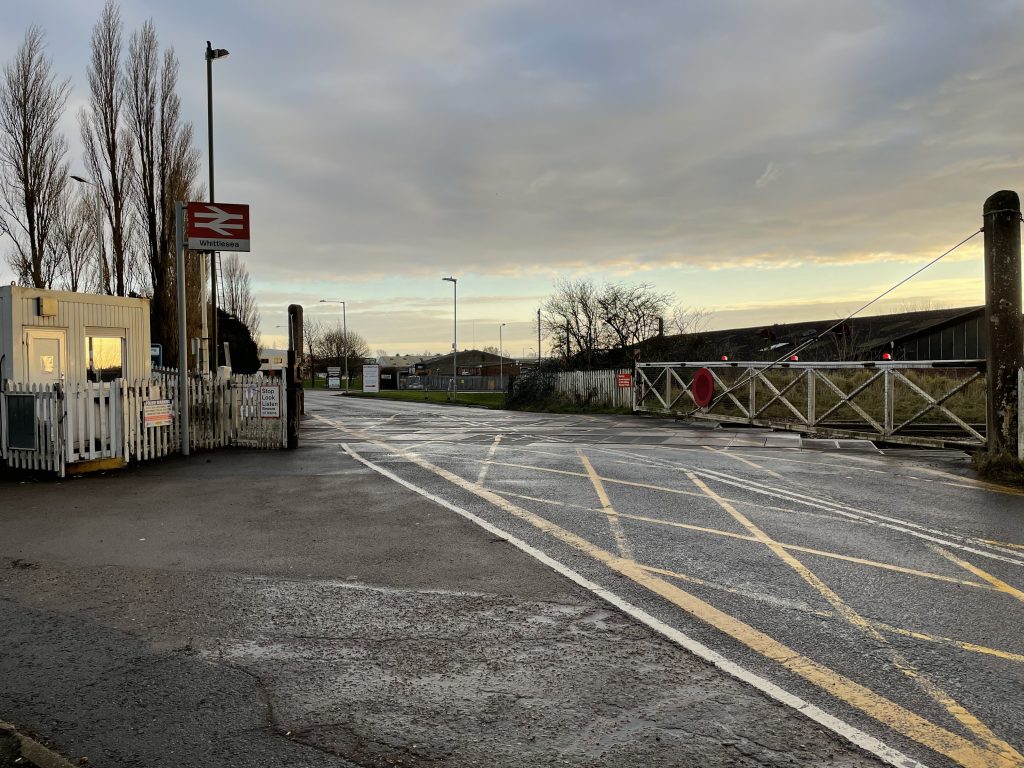 So the morning routine in our house is largely defined by one thing – beating the train gates.

Near the end of our road is Whittlesey train station and Jude’s nursery lies just beyond. Now this is important because it has a manual gate which must be opened by the gatekeeper.

Ah the gatekeeper, the final warden of civility between the secure homestead of Whittlesey and the barbarian hoards who lie beyond, whose territories excite and terrify in equal measure with names such as “War-boys”, “Ramsey Heights” (Highest point 0.8m above sea level) and “Cambridge”.

Well the gatekeeper delights in keeping people from leaving and unless I get to him by 7.57am I am destined to spend the rest of time sat in purgatory (or at least until 8.04 when the train has passed).

This is my epic tale of the ultimate race against the clock on a typical weekday morning.

6.40 – I’m showered and dressed. Collect washing for the machine. Load machine. Rodney the Cat is meowing at back door with a somewhat desperate meow on account of the fact that I occasionally forget to let him and he therefore will be destined to spend the day not snoozing on my comfy bed but instead sheltering under the trampoline in the rain. Forgiveness is not so forthcoming with my feline friend so today I decide to offer an olive branch by letting him in earlier than his allotted 7am door opening time and feed him as well. No gratitude offered by cat.

6.47 – Wash up dishes I could not be bothered to wash up the night before

6.54 – Wow I’m smashing it, I’m ready for the boys! I’ve even got 6 minutes to trawl YouTube for hilarious videos of chinchillas  wearing waistcoats.

7.00 – Hmmm I don’t hear the faint sound of tiny feet rising from their slumber (or whacking great ones either for that matter).

7.04 – Ok this is not good. I now have only 53 minutes to wake, change, dress, feed and pack up 3 small persons who I know have a world class ability to procrastinate.

7.06 – Fearful of the old adage ‘never wake a sleeping baby’ I sneak into Jude’s room and as subtly as possible seek to rouse him. I cough as faintly as is humanly possible whilst pretending not to notice the sleeping boy. No sign of life. I step it up a notch by opening the window and pulling the curtain back. There’s movement, a deep sigh followed by a slight eye rub. Ok Jonny bring it home, you’ve got this. You’ve nearly convinced him that he woke naturally. “Good morning Jude, I didn’t see you there, how lovely to wake up entirely of your own volition hahaha (fake laugh)” Nervous moments, has he bought it… waaaaaaaaahhhh!!! Sigh.

7.07 – Whilst waiting for Jude to pause for breath Harry and Josh both emerge from their room like little Terracotta soldiers coming to life after thousands of years buried underground – hurrah!

7.14 – After wrestling for 7 minutes with Jude in an effort to change his nappy, and put some trousers and a top on him, he is now butt naked and every time I put him on his back he does a seriously good impression of a crocodile death rolling it’s prey. Oh and squealing with delight, “how kind of daddy” he thinks, “to play this fun game with me all morning!”.

7.20 – 1 boy dressed, ok what about the older 2, they must be dressed by now. I enter their room, both are in their pj’s having got out their entire Lego collection and spread it around the room as if awaiting an ofsted inspection.

7.24 – 3 boys now partially dressed, enter the kitchen. Provide breakfast for them despite the fact all 3 will have another breakfast at school/nursery in approx 46 minutes.

7.37 – Eek just remembered a very kind friend is coming round to clean the house for me today. I must clean the house so it’s ready for her to clean. Spend 8 minutes running round like Mary Poppins on steroids.

7.45 – Enter living room to find half-dressed Harry seeing if he can balance on the top of the sofa. He cannot. Remaining clothes brought to him.

7.47- 3 boys ushered into the hallway and are instructed to put on shoes. Final check upstairs to ensure house is clean and tidy.

7.51 –  Come downstairs. 3 pairs of shoes still sat on the mat untouched. Boys nowhere to be seen. All now back in living room seeing if they can balance on top of sofa (they cannot).

7.52 – Josh decides he’s not going to school today and will spend the day with Daddy. Daddy presents business case as to why this is unlikely to occur. All ushered into hallway and shoe putting on forcefully encouraged.

7.56 – Jude changed and in car seat (police ground pinning techniques may have been used to ensure compliance).

7.57 – We’re in the car, this is it! About to pull out of the driveway when I realise the downstairs bathroom window has been left open. Disaster! Spilt second decision as to whether I can justify leaving it open all day in order to beat the gate…. As a respected officer of the law I can’t – and my fellow officer of the law neighbour might see and tell me off. Run in, close window, run back to car and we’re off.

7.57:49 – This is it, I round the corner to see the fluorescent jacket of the gatekeeper appearing from his lofty keep, like a gunslinger from the Wild West his hand reaches out for the gate as I approach using every last mph of the legal speed limit. Until finally…

Success!! I’ve made it, the crowd go wild, Josh lets out a loud cough and Jude gurgles on some leftover breakfast. But I know what they really mean “My Dad is the best – because he beat the train gates!”.